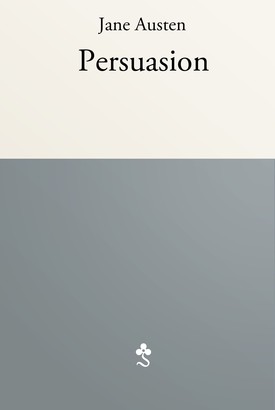 Persuasion is Jane Austen's last completed novel. She began it soon after she had finished Emma, completing it in August 1816. More than eight years before the novel opens, Anne Elliot, then a lovely, thoughtful, warm-hearted 19-year old, accepted a proposal of marriage from the handsome young naval officer Frederick Wentworth. Sir Walter, Anne's fatuous, snobbish father and her equally self-involved older sister Elizabeth were dissatisfied with her choice, maintaining that he was no match for an Elliot of Kellynch Hall, the family estate. Her older friend and mentor, Lady Russell, acting in place of Anne's late mother, persuaded her to break the engagement. Now 27 and still unmarried, Anne re-encounters her former love when his sister and brother-in-law, the Crofts, take out a lease on Kellynch. Wentworth is now a captain and wealthy from maritime victories in the Napoleonic wars. However, he has not forgiven Anne for rejecting him.

Jane Austen is best known as the author of Sense and Sensibility, Pride and Prejudice, Mansfield Park, Emma, Northanger Abbey, and Persuasion. She wrote as many as 3,000 letters during her lifetime, but only 161 survived (the recipient of these letters, her sister Cassandra, burned the majority of them; this was, ostensibly, to stop anyone from reading Jane's "sometimes acid or forthright comments on neighbours and family members").

The Odyssey of Homer, Translated by George Chapman
Homer

The Complete Works of Beatrix Potter: 22 Children's Books with 650+ Original Illustrations in One Volume
Beatrix Potter

ANNE OF GREEN GABLES - Complete Collection: ALL 14 Books in One Volume (Anne of Green Gables, Anne of Avonlea, Anne of the Island, Rainbow Valley, The Story Girl, Chronicles of Avonlea and more)
Lucy Maud Montgomery