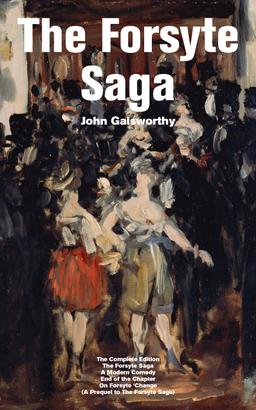 This carefully crafted ebook: “The Forsyte Saga - The Complete Edition: The Forsyte Saga + A Modern Comedy + End of the Chapter + On Forsyte 'Change (A Prequel to The Forsyte Saga)” is formatted for your eReader with a functional and detailed table of contents. The Forsyte Saga is a series of three novels and two interludes published between 1906 and 1921 by Nobel Prize-winning English author John Galsworthy. They chronicle the vicissitudes of the leading members of a large commercial upper middle-class English family, similar to Galsworthy's own. The second trilogy of the Forsyte Saga is A Modern Comedy, written in the years 1924 to 1928. This comprises a novel, The White Monkey, an interlude, A Silent Wooing, a second novel, The Silver Spoon, a second interlude, Passers By, and a third novel Swan Song. The third trilogy of the Forsyte Saga is End of the Chapter, comprising Maid in Waiting, Flowering Wilderness, and Over the River (also known as One More River), chiefly dealing with Michael Mont's young cousin, Dinny Cherrell. The three trilogies are published under the collective title of The Forsyte Chronicles. In 1930 Galsworthy published On Forsyte 'Change which deals in the main with the older Forsytes before the events chronicled in The Man of Property. John Galsworthy (1867–1933) was an English novelist and playwright. He won the Nobel Prize in Literature in 1932. Table of Contents: The Forsyte Chronicles: The Forsyte Saga Book 1: The Man of Property Interlude: Indian Summer of a Forsyte Book 2: In Chancery Interlude: Awakening Book 3: To Let A Modern Comedy (Second Trilogy of the Forsyte Saga) Book 1: The White Monkey Interlude: A Silent Wooing Book 2: The Silver Spoon Interlude: Passers By Book 3: Swan Song End of the Chapter (Third Trilogy of the Forsyte Saga) Book 1: Aid in Waiting Book 2: Flowering Wilderness Book 3: Over the River (One More River) On Forsyte 'Change

﻿John Galsworthy was born in 1867. An early encounter with Joseph Conrad helped inspire him to write, and he went on to emerge as one of the most widely read novelists of his day, a reputation standing the test of time. He was elected the first president of International PEN, the association of writers, in 1912. He is best remembered for his trilogy The Forsyte Saga, which clinched his award of the Nobel Prize for Literature in 1932. He died in 1933, aged 65.

THE FORSYTE SAGA: The Man of Property, Indian Summer of a Forsyte, In Chancery, Awakening & To Let
John Galsworthy

THE FORSYTE SAGA - Complete Series: The Man of Property, Indian Summer of a Forsyte, In Chancery, Awakening & To Let
John Galsworthy

No Money and No Regrets: 2 autobiographical stories and essays about (the lack of) money: How to Live on $36,000 a Year + How to Live on Practically Nothing a Year
F. Scott Fitzgerald