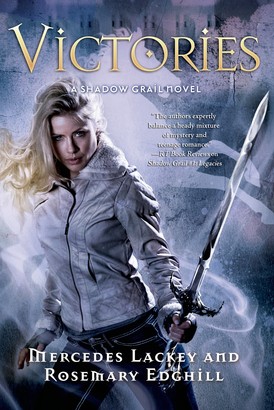 Spirit White and her friends Burke, Loch, and Addie have escaped from Oakhurst Academy. But their freedom has come at a terrible cost--a dear friend sacrificed her own life to save theirs. In the wake of Muirin's death, they are also forced to deal with the terrifying truth behind the facade of Oakhurst Academy: all of the legends are true.

Queen Guinevere, King Arthur and the Knights of the Round Table really had existed. With the magic of Merlin, they were able to imprison their greatest foe, Mordred, before he could plunge the world back into the Dark Ages. But Mordred is now free, in charge of Oakhurst Academy, and determined to finish what he started so long ago.

Pursued by Shadow Knights, the reincarnated remnants of Mordred's original army, Spirit's small band undertakes a quest to recover the Four Hallows, objects of immeasurable power. Memories of a past life have begun to surface, one in which Spirit wields a legendary sword. She comes to realize that these memories are the true key to Mordred's defeat. Can Spirit and her friends manage to recapture the magic of Camelot in time to save their fellow students and prevent the end of the world?

Shadow Grail #4: Victories is the fourth and final book in the Shadow Grail series by the New York Times and USA Today bestselling authors Mercedes Lackey and Rosemary Edghill.

Mercedes Lackey is a well-known author of fantasy novels and she often collaborates with other authors. She is known for her Valdemar novels (which involve complicated stories about relationships between human and non-human beings) and that bring into the story all manner of cultural issues such as social mores and ethics.

While the structure (outer structure) of Lackey&#39;s world in her writing resembles our world as we know it, the world within the world is one that is inhabited by vampires, fire-starters, witches, elves, magicians, sensitives, wizards and the like all who can work powerful magic in our world through different portals (as in this book). Lackey lives with her husband outside of Tulsa, Oklahoma in a house that is a 2 and 1/2 story concrete dome with an octagonal wooden shell placed over it; a house that is as unusual as the stories she creates.

The Sword and the Dagger
Robert Cochran